By now I don’t know how many times I’ve told you should stay in a Riad while visiting Marrakesh. Well, let’s say that it’s a must. Then, how to choose the right Riad in Marrakech? Cool, this is not what you have to worry about. The pink city is home to breathtaking riads and choosing the right one which fits your needs is really very easy.

I have been to Marrakesh more than once, which is how I tried several riad options. I have to say that because of one reason or another, I liked them all, but I’m particularly impressed by some.

Before we go forward with the one I stayed in this last time, Dar Lalla F’dila, I want to explain something interesting to you.

Difference between a riad and a dar.

I just wanted to let you know this first in order to introduce you to Dar Lalla F’dila, a beautiful place where I stayed at in Marrakesh. Which is not a riad, but a dar.

This beautiful and charming dar in Marrakesh has been run by Véronique Fabre since 2008. She is a French lady living in Marrakech.

My goodness the name of this dar doesn’t help at all, but this is the only one “downside” of this dar. Throughout my entire stay in Marrakesh, I haven’t been able to learn how to say the name and I’m pretty sure that to this very day, I’m pronouncing it in my own way.

The name has an evocative meaning since it comes from the person who Véronique herself met 25 years ago: Lalla F’dila. The house initially was hers, but her grandfather sold it later. She was then disinherited, so Véronique thought to give her back what was hers by naming her place this way.

That been said, I’ll tell you now that this dar in Marrakesh is one of the places I really loved staying at. The warm response since the beginning showed great promise.

How to reach Dar Lalla F’dila

Alessandro and I didn’t rent a car in Marrakesh this time. We were picked up at the airport by a taxi arranged by our dar.

From Menara airport, we arrived at the Medina of Marrakech in 20 minutes. Well, one of the facts you should know when booking a riad or dar in Marrakech Medina is that you won’t be able to get close to the front door by a vehicle, So, whether you are driving yourself in Marrakesh or going around by taxi, once at the walls of the Medina you have to walk to your hotel. If you are a first-time traveller to Marrakesh, then I highly recommend asking for help at your accommodation. Don‘t expect to orient yourself with a map. It’s pretty hard for first timers. I don’t want to go into this in detail right now. It is something that you will understand only once there!

Having already arranged the taxi, the driver walked us to the dar where Abdoul, the manager, came to help us.

What is special about Dar Lalla F’dila?

Compared to all the other places I’ve stayed at in Morocco, this beautiful dar in Marrakesh has something more.

Dar Lalla F’dila is an integral part of the Marrakech Museum which is famous for its notable architecture. It represents one of the many places built by the wealthy elite during the 19th and 20th century. And, Véronique proudly also said that it was once home to Josephine Baker, the famous American-born French entertainer.

This dar in the heart of Marrakesh is in fact full of history. All these historical references besides being evident, also give extraordinary warmth to the house.

Among the special things about Dar Lalla F’dila, I also want to say that even if they propose giving a western comfort, the traditional Moroccan atmosphere is not forgotten here.

A special mention goes to Veronique’s team: Abdou, Hafid, Najia, and Fatima. They are incredibly professional and attentive but at the same time helpful and friendly at the right moment. It is really nice to see how each of them cooperates to make everything run smoothly. They are certainly an additional bonus to this dar in Marrakesh.

One more plus point of Dar Lalla F’dila is its location. Even being in the Medina of Marrakesh very close to the famous Jeema El fna Square, it is quite off the beaten path. This is a perfect fit for anyone looking for calm after a crazy day in the city. Located in a small alley, guarded from 8 am to 8 pm, it is truly an oasis of calm.

Dar Lalla F’dila has five rooms furnished in a Moroccan style but as I already told you, without forgetting the comforts. Although we didn’t use it, there is a beautiful Hammam and a stunning terrace, which I can imagine would be the perfect place to relax after a hectic day of sightseeing in Marrakesh.

The day we arrived Alessandro had a fever, so we decided to not go out that evening and to remain at our Dar for dinner. We had some chicken tajin with potatoes and some vegetable dishes. The food was delicious, but what surprised me even more was the delicious Moroccan wine they served (which is widely not avalable in Morocco).

Here is another piece of advice for you! If you are staying at this dar in Marrakesh, you should have at least one meal here because all their dishes are home-cooked and have the real taste of the Moroccan gastronomy. I mean, not adapted to the tourists’ taste. During the winter the meal is served in a room with a fireplace and in the summer on the terrace.

Upon request, Najia, the cook, can also prepare vegetarian or even vegan food.

*DISCLAIMER: Thanks to “Dar Lalla F’Dila” for sponsoring my stay! Although, I was a guest, all opinions are my own.

Dar Lalla F’dila could be the perfect place to stay in Marrakesh. It would make an ideal base to escape the craziness of the souks and experience the local neighbourhood, whilst still being only a five minutes’ walk away from all the main attractions. So, I think you should definitely consider staying at Dar Lalla F’dila if you’re planning a trip to Marrakech.

Jemaa el-Fna Square, one of the most folkloric places in the world. 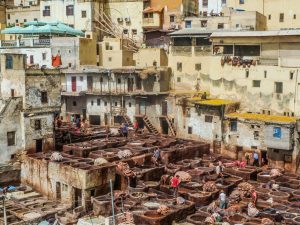 Chouara Tannery in Morocco - All You Need to Know