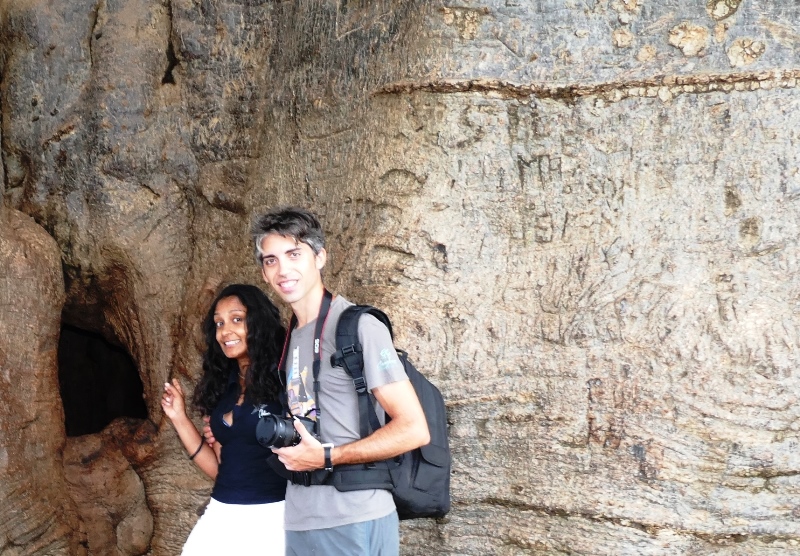 Among the million things to do in Senegal, you can also fit in a visit to the Samba Dia Baobab tree. To be honest I would suggest this experience only if you are visiting this area of Senegal. Otherwise, I would not specifically fit this plan on my Senegal itinerary unless you are inspired by biggest trees or have a special passion for flora.

I want to be clear, though, that it’s not going to be an unpleasant experience.

What is Samba Dia Baobab tree?

Samba Dia Baobab is the biggest baobab tree in Senegal. Its trunk is very wide, I mean its circumference is 33 m. You could almost live inside it! It is about 580 years old.

Now, the Senegalese believe that baobab trees are sacred, and because of this they take special care for these trees so much that baobab trees are often central to the life of villagers who ask the spirit of the tree for good fortune, health, or success. So you can imagine the meaning that such a large tree like Samba Dia baobab could have.

How to get to Samba Dia Baobab tree.

Samba Dia is about 10 KM south of Joal Fadiouth on the Piste Joal – Samba Dia road. So if you are driving yourself in Senegal, when you get close to Joal Fadiouth, take the route towards Fadial and Samba Dia. About 10 km from Joal-Fadiouth you will find the oldest and biggest baobab in Senegal.

If you’d prefer to visit Samba Dia baobab while on your day trip to Joal Fadiouth, once you reach the island by way of a short pirogue ride or by a wooden bridge you can take a horse cart or a donkey cart to reach the Samba Dia baobab.

The horse ride costs around 5000 CFA and the donkey ride about 3500 CFA. Normally they don’t carry more than two people on donkey carts and about 5 on horse carts. We were 4 people, the two of us plus two other girls staying at our same hotel in Joal Fadiouth. We took the horse cart and I tell you, that poor horse struggled a lot trying to pull us.

What no one will tell you about how to get to Samba Dia Baobab is that being only 8 km from Fadiouth you can also just walk. I highly suggest you do this if you have enough time available. Given the fact that it is close to the Sine Saloum area, the scenery is very special and pleasant here.

Things to do at Samba Dia Baobab as a tourist

When baobabs grow old, often the tissue inside the trees dies, leaving behind a big hole. For big trees, these holes are like caves and are big enough to accommodate several people. Samba Dia Baobab has a huge hole where you can get inside and see the world from inside the trunk. Many tourists try this experience.

After all, it makes sense once you are there considering the fact that it is going to be a one time experience. I did that and I’m glad I did it, but I wouldn’t try it again because there are a large amount of bats living inside its trunk and it was really disgusting hearing them flying above my head. And also the ground was soggy. Feeling my foot sinking at every step where there was no light at all was terrible. And yes, they occasionally also poop on you. To which I also add the noise of the bats.

Pay attention and evaluate the situation before making a decision.

Also know that the hole to enter the tree is narrow and too high to put your legs in first, you have to put your head in first. Half-way through, you need to turn your body and push yourself out. You will also need the people outside the tree to help pull you out. The man who takes you inside the tree will ask you for 500 CFA.

The second thing to remember is that at the Samba Dia baobab there are several men selling local hand craft items. Unlike the ones I saw in Joal Fadiouth, they are pushy and this is a bit annoying. We, the four of us, bought nothing, but being able to leave that place without buying anything was hard. I guess they insist so much because not many tourists visit Samba Dia baobab, so they try harder to sell something to the ones who do show up. They also accept dollars and euros that they later exchange at the local markets for good rates.

My final thoughts about the Samba Dia visit.

All in all, I can say that my Samba Dia baobab tour was enjoyable.

What I loved even more was to see the rural part of Senegal where tourists don’t usually go. On the other hand, I would not suggest this experience if you are not planning to visit this area of Senegal already.

There are too many things to do in Senegal that reserving a day for a visit to this baobab may simply not be worth your time. Also consider the fact that moving from one place to another in Senegal is always a battle.

Things to know for a trip to Joal Fadiouth