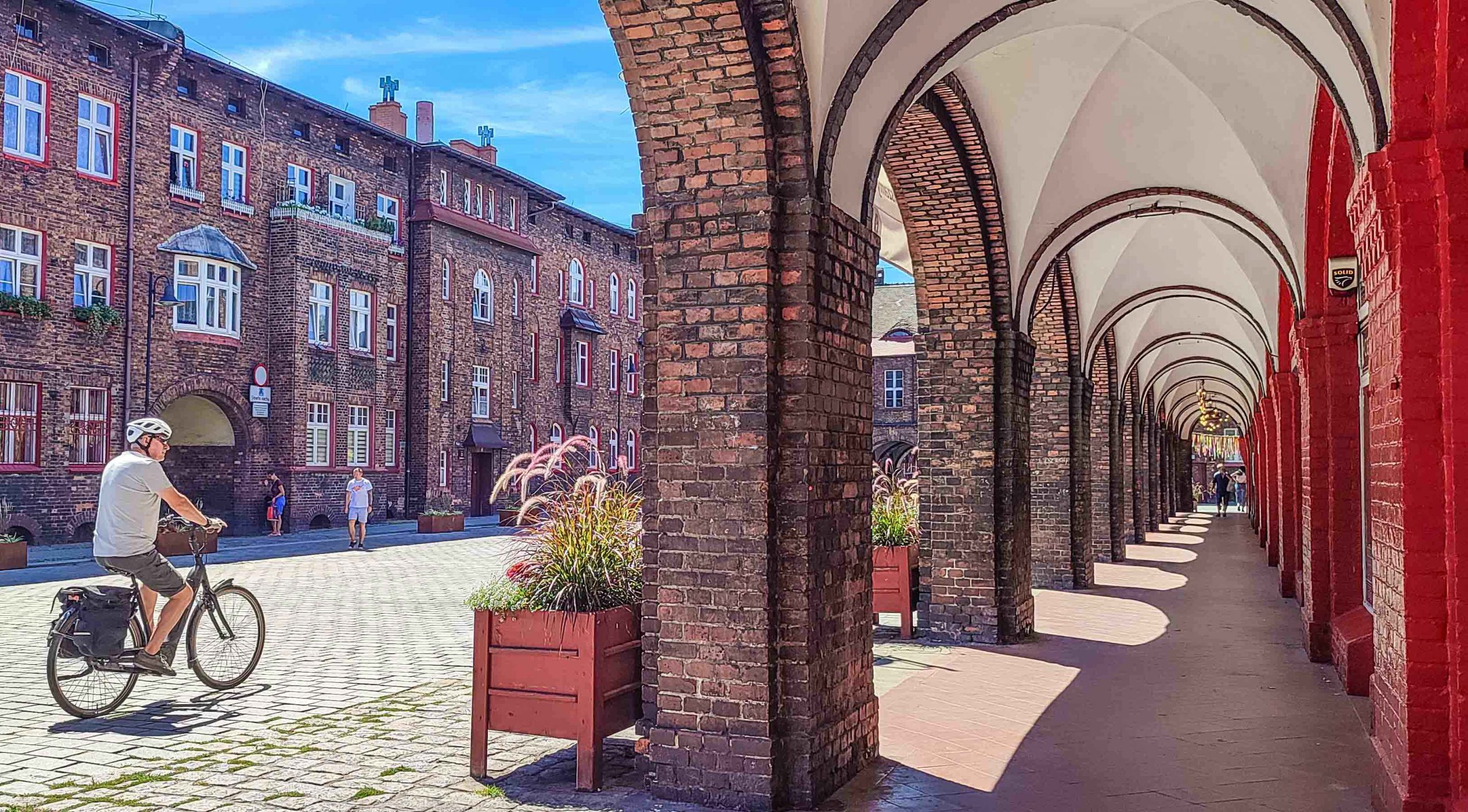 Katowice has a reputation for being a mining city and its sudden growth in the 19th century is definitely the cause of today’s well-being of the city.

During that time among the various innovations that was made, there is also, the mine-workers settlements built in its surroundings aimed to give the miners and their families a better quality of life. One of these districts is Nikiszowiec, commonly called “Nikisz” by the locals.

Nikiszowiec, named after the “Nickisch” mining shaft, is a neighbourhood for 8,000 people made of red brick interconnected apartments. More precisely it was built for miners at the Giesche colliery.

At Nikiszowiec there were 1,000 apartments, all in beautiful red brick buildings that had shops, a police station, bakeries, a swimming pool, a hotel, a school, and a church close at hand. It was built to offer a high quality of life for miners and their families.

Today it is one of the most visited places in Katowice or it’s even better to say, in all of Silesia. Cafes and culture are now beginning to creep into this part of town and you’re indeed no longer likely to be the only tourist strolling around in this former miners district. After all, Nikiszowiec neighbourhood is one of the most beautiful instagrammable places in Katowice.

In the 1880s, due to the booming of the mining companies in Silesia Region, more workers were needed and in order to control them better and also to find a way so that they didn’t have to waste time commuting, it was quite common practice for the owners of large factories to build housing estates for workers close-by.

When Georg von Giesche’s Erben, a mining corporation that originated in the early eighteenth century, which already owned several industrial plants in Silesia Region, started to purchase land south-east of Katowice and started to build mines, the need to provide homes for miners employed at its company was born.

Taking its name from the mine’s Nickisch Shaft next to it, the estate was finished in 1924. The church was put into service in 1927 since its construction had been interrupted for several years after the outbreak of World War I. From its completion Nikiszowiec was a separate, self-contained city. But in 1951 it was absorbed by the city of Katowice.

Nikiszowiec neighbourhood, being an important place for worker’s strikes and subsequent Silesian uprisings, played an even more important role in history.

In the later days, as a result of some political transformation, many mines were liquidated and employment was significantly reduced. Nikiszowiec neighbourhood then started to struggle with serious social problems. It was eventually left abandoned. So it was that the entire area was involved in drugs, delinquency, and criminal activities until more recently when the government decided to change its face in order to give opportunity to everyone to visit and enjoy this superb piece of Polish national heritage.

Situated on the outskirts of the city, it could not wait for revitalisation projects. Luckily, it was soon discovered by tourists. So what was not long ago a dicey prospect, was cleaned out and has been made into a fashionable place to live, as well as a destination for tourists.

Nikiszowiec finally has also started to attract new residents and it is becoming more and more fashionable every day. Today it has its own community that organises cultural events and fairs. And, an association founded by social psychologist Philip Zimbardo supports local identity and the integration of residents.

In 1978 Nikiszowiec neighbourhood was entered in its entirety into the register of monuments and in 2011 it was declared a Historic Monument since it represents the unique history of Poland. At the “History of Katowice Museum” in Nikiszowiec you can pick up free of charge an audio guide about the neighbourhood, which is the best way to learn more while walking around Nikiszowiec.

The Nikiszowiec neighbourhood was designed by architect cousins Georg and Emil Zillman, and it was projected to be a completely self-sufficient community for 1,000 workers and their families. It indeed was conceived with two schools, a hospital, police station, post office, swimming pool, bakery, commercial shops, and a church. In short, a real town with everything needed.

In total, about 1000 flats were built in the estate, most of which contained two rooms and had 63m2 of floor space. It was designed according to the idea of a garden town.

The enclosed residential complex of Nikiszowiec is composed of nine compact four-sided three-floor blocks with inner courtyards, with a network of streets between them. Distinguished by its uniformity of style, there are red brick buildings accented with red painted window framing and narrow streets joined by arcades on the ground floor, which give a sense of unity to the entire estate.

It was built entirely of brick and although it seems that the houses appear identical, individual quarters differ in size and plan, and the houses have different shapes of window bays, gates, and window frames. Some apartments are equipped with loggias, and some floors of the houses are separated by decorative brick friezes. Out of a total of 126, there were no two identical entrances to the staircases. The homogeneous, coherent architecture of Nikiszowiec is, therefore, also subtly diversified. The building’s most characteristic elements are the window niches painted red (red paint was the cheapest and most easily accessible).

To date the Nikiszowiec colony has preserved its original appearance so you will get the exact view of what it once was.

5 best things to do in Nikiszowiec.

Since it was built as a residential area, besides wandering around its beautiful alleys, there are really a lot of things to do in Nikiszowiec.

These are just a few of the things that you can do in Nikiszowiec neighbourhood. Obviously if you still have some more time available you can decide to stop for a lunch or for a lemonade break before enjoying the rest of the colony by visiting the Zimbardo Centre, the former studio of Grupa Janowska, Jantor Ice Rink, the Wilson Shaft Gallery, Former Town Hall, and the Pułaski Shaft. For more things to do in Nikiszowiec neighbourhood downloap the map here.

We had a lemonade at a cafe called Maola. It was delicious and also the place is very characteristic of the area.

If you are based in Katowice, then don’t forget to check out this Traditional Polish Food Tour

How to get from Katowice to Nikiszowiec.

Since it is located only 8km from Katowice railway station, getting to Nikiszowiec is very simple. There are three ways to get to Nikiszowiec: by walking, by bus, and by taxi.

How much time you need to visit Nikiszowiec.

This old living quarter which used to be a home for coal mining related workers is truly a good place if you want to have a little walk to check out some historical buildings or eat some good typical food.

In our case, we were based in Katowice near the railway station and to get to the Nikiszowiec neighbourhood we took the taxi at 11 am and left Nikiszowiec at 14.11 by bus. Since it was our last day in Katowice, we did it in a bit of a hurry.

Keep a good 5 or 6 hours for this day trip from Katowice. Besides visiting this and that remember that Nikiszowiec neighbourhood is one of the most instagrammable places in Katowice so you will for sure end up spending a pretty good amount of your time taking some photos. And, if you still have some time left, you should also know that there are a few very good restaurants located in the area.

Some curiosities about Nikiszowiec.

I fully recommend this architectural gem as a must-see place in Katowice. Don’t forget to pay this area a visit because it helps you to understand the Silesian culture. The best way to experience this place is by joining one of those organized tours called “Nikiszowiec on tour.” I am convinced that it can really give an additional value to your trip to Nikiszowiec neighbourhood since the history of mine working in Poland is better explained. This is one of those Polish national heritages that deserves to be understood. 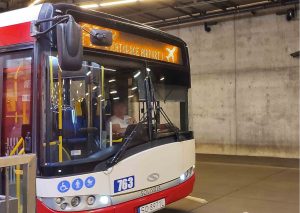 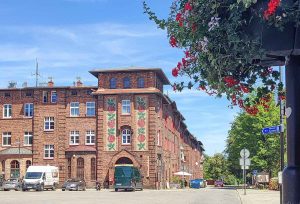 How to get from Nikiszowiec to Katowice by bus.